When they take their last breath – a reflection on that singular moment.

Today I was with friends when they had to put their beloved dog down. Memories flooded back of occasions when I was with loved ones—family members, friends, and pets—at the point they took their last breath.

That moment of a last breath is as replete with mystery as is the moment of a first breath when a new life enters the world.

I do not expect ever to be able to comprehend its potency as long as I live which is of course stating the obvious. None of us on this side of death’s door can appreciate what it is like to walk through it, never to return.

We understand the physiology and science can explain some of the neurobiology.

But such explanations are woefully inadequate for me.

Two months ago, I held our cat as the vet injected him to relieve him of the pain from pancreatic cancer that was ravaging his little body. At one moment before the injection, Simon was breathing. He was alive. He was Simon. Two minutes later, he was not. Neither alive nor my Simon. Only an inert though soft and familiar body.

Two years ago, I sat beside Bill my long-time lover holding his hand as his breathing peaked in sharp erratic bursts, then slowed to quiet measured intakes and exhales, and then finally stopped altogether. That moment at 10:30pm on a Sunday evening occurred as he lay in a hospital bed in our living room sixteen days after he had been diagnosed with stage four pancreatic cancer. The same cancer that felled Simon. At 10:29pm Bill was still with me. At 10:30pm he was no longer. How is that possible? To be here and then not to be here.

Interpreting to where their spirits move after this world is the province of others wiser than I am and for times more contemplative than this. What transfixes me today, having just accompanied my friends as they lost a dog that was as significant in their lives as just about any other family member, is that final moment.

Though the moment when they took their last breath is beyond my comprehension, it is not beyond my experience. I lived that moment with those loved ones. And for that I thank God. Those singular moments are amongst the most treasured of my life.

The photo below taken several years ago is of my partner Bill and our friends’ dog that had to be put to sleep today. 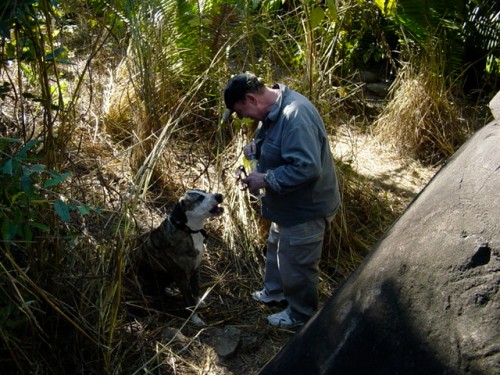