In these days, weeks, and months of isolation due to the coronavirus pandemic, music is playing a key role in comforting us as we struggle with our fears, our loneliness, and our depression.

But ironically, it can also provoke pain. That’s not a bad thing. It’s a good thing.

For musicians, as therapeutic as it might be to play and record music in conjunction with others for online transmission through the wonders of technology, it reinforces their painful reality of not being able to perform together live on stage with their much-beloved colleagues in front of an audience.

For us non-performers, listening to music such as the many wonderful new online creations of musicians and the many archival performances that are being streamed by arts organisations touches a deep level in our souls at the same depth where hovers our fear of sickness and death and our sadness about the constrained situation in which we find ourselves as individuals and societies.

That capacity of music to touch us so deeply (physically, psychologically, emotionally, spiritually) intensifies our pain. And that’s okay. Connecting with our pain through the mysterious energy of music is, counterintuitively, a way for us to live through these difficult times. The music prompts tears for both performers and listeners. And when we weep together, we feel palpably how much we are not alone. We are together as lovers of music. And the music itself is a modality of this companionship. As we support each other, we are surrounded, indeed bathed in, the ethos of the music in all its tragic, heart-wrenching, poignant, profound, contemplative, idiosyncratic, exhilarating, exuberant, joyful manifestations. 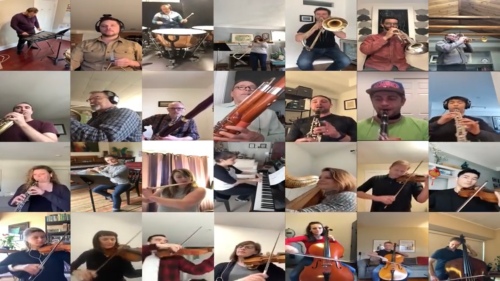