The Birthday Party That Wasn’t

It was my birthday. And not just any birthday, but one of the BIG ones, one of the milestones. I’ll let you guess which round number.

Bill had planned to have a massive celebration to mark my birthday—a party with legions of friends, copious wine, catered food, rainbow-coloured streamers, a phalanx of clowns, hot air balloon rides for everyone, several huge birthday cakes out of which would pop scantily-clad singer-dancer-models to appeal to the range of appetites of the partiers, and a door prize of a date with Hugh Jackman who, according to Bill, had agreed to go out with whoever won, regardless of gender and sexual orientation.

Those were his dreams for my birthday party, as they stood in the early planning stages. He claimed that, because of how much he loved me, he wanted to do something dramatic.

Well, he did love me. He did do something dramatic. But it wasn’t throwing the birthday party of the century.

When that birthday came around, I stayed in bed and hid under the covers. The concept of celebrating seemed intolerable.

Today, is the second birthday of mine since Bill died.

I’ve gotten out of bed.

August Farewell, my memoir of our 33-year love affair that culminated in Bill’s sudden death from pancreatic cancer, is available through http://amazon.com and other on-line book retailers.

The photo below was taken on trip Bill gave me for an earlier birthday to a quaint town you may have heard of on the Adriatic Sea. 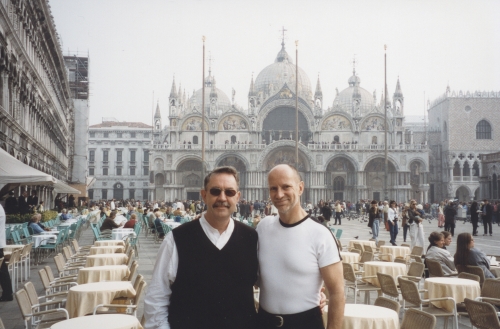 2 responses to “The Birthday Party That Wasn’t”